After extensive testing, the largest ballasted flocculation system in the United States is now ready for wet weather.

According to historical plant data, when peak flow is more than twice the average flow, the amount of waste in the wastewater is significantly lower than usual. Based on pilot work with similar wastewater quality, the project team decided that ballasted flocculation and disinfection would meet excess-flow plant effluent requirements, which were imposed by the Kansas Department of Health and Environment. All effluent must meet the plant’s National Pollutant Discharge Elimination System (NPDES) permit.

The excess-flow facility consists of an ACTIFLO ballasted flocculation system by Kruger Products
(Cary, N.C.). Kruger was responsible for the process and system design and supplied all the equipment. The system includes two 76,000-m3/d (20-mgd) treatment basins and is currently the largest ballasted flocculation facility for sanitary sewer overflow in the United States.

As in conventional water treatment technology, a coagulant is used to destabilize suspended materials entering the process and a flocculation-aiding polymer is added to aggregate solids into larger masses. The resulting floc is removed by settling.

The ballasted flocculation system enhances this process by adding microsand (fine sand similar to silica powder) as seed for developing high-density floe, which is ballasted by the relatively high-density microsand and so more easily removed by settling. The benefit of the ballasted floc process is the ability to achieve good solids removal performance at a very high surface overflow rate. The process can be rapidly started and optimized even with variations in flow and water quality.

With most of the floe forming in the flocculation chamber, the ballasted floc settles in the sedimentation chamber, which is equipped with lamella plate settlers.

Clarified water then flows over effluent weirs to the excess-flow chlorine contact basin. At this basin, the flow is disinfected by sodium hypochlorite and dechlorinated with sodium bisulfite. It is then blended with treatment plant effluent and discharged to the Kansas River.

The microsand-solids mixture collected at the bottom of the sedimentation chamber is withdrawn and pumped to a hydrocyclone, which separates excess water and solids from microsand. The separated microsand is concentrated, discharged through the bottom of the hydrocyclone, and reinjected into the ballasted flocculation process. Most of the microsand is recycled in the ballasted flocculation basins for further flocculation. The solids separated by the hydrocyclone will flow by gravity back to the head of the plant to the influent pumping station, where they are treated by the main biological treatment process.

After the ballasted flocculation basins were constructed, each basin was checked mechanically and tested for performance. The ideal time for process performance testing is during wet weather events, but it is difficult to predict when a storm event will occur. So, the project team developed a plan to simulate a storm event to test the system (see Table 2, p. 33). However, this plan proved to be unworkable because the influent pumping was being modified.

During testing, separated solids were pumped to the liquid process streams downstream of the primary basins. If the chemically enhanced solids had been recycled during the performance test, the project team was concerned that they would enhance the polymer and ferric chloride dosages and skew the results.

After the ballasted flocculation equipment was completely field-tested, mechanical startup testing began. Because the ballasted flocculation basin is discharged directly into the Kansas River and this was the first sanitary sewer overflow facility of its kind, the project team designed two testing operations. In the first, the facilities were operated with a blend of nonpotable (disinfected plant effluent) and service water to alleviate any concerns about direct discharge into the Kansas River and violations of the plant’s NPDES permit. In the second, primary basin effluent from the excess-flow storage basin was pumped and treated by the ballasted flocculation basins. Each basin was operated for 6 hours at a 23,000-m3/d (6-mgd) flow rate, and microsand pumps were operated during the entire period. Ferric chloride, polymer, and microsand were used in the ballasted flocculation basins (polymer and ferric chloride were dosed at 2 mg/L and 100 mg/L, respectively). The flow was disinfected with sodium hypochlorite and dechlorinated with sodium bisulfite in the excess-flow chlorine contact basin. The flow was then blended with treatment plant effluent and discharged to the Kansas River. Both testing phases evaluated the following items:

After satisfactory completion of mechanical startup testing, field optimization and process performance test-ing were conducted. Each train was tested during a 6-hour period for 2 consecutive days. During testing, which was similar to the latter part of mechanical checkout, primary basin effluent was stored in the excess-flow storage basin. The project team provided temporary pumping at a 76,000-m3/d (20-mgd) flow rate, and flow was discharged at the excess-flow splitter—screening facility. After fine screening, primary basin effluent flowed by gravity to the ballasted flocculation basin for treatment (polymer and ferric chloride were dosed at 1.5 mg/L and 100 mg/L, respectively). After treatment, flow was disinfected with sodium hypochlorite and dechlorinated with sodium bisulfite. The flow was then blended with the normal plant effluent and discharged to the Kansas River. During the process performance test, wastewater flow was maintained at 3800 m3/d (1 mvd) to each process treatment train to maintain normal operations. In addition, the following items were recorded:

Grab samples of influent and effluent flow to
the ballasted flocculation system were collected every hour and analyzed for:

During mechanical startup testing, the project team noted that white foam developed where the flow dis-
charged into the ballasted flocculation basin’s effluent weir troughs and into a common effluent flume before discharging to the excess-flow chlorine contact basin. At the troughs, the flow falls about 4.3 m (14 ft). Foam was also noticed at the discharge of the excess-flow chlorine contact basin effluent box, where flow falls about 3 m (10 ft). During the first day of optimization and process performance testing, white foam appeared at these two locations after the first hour of operation. Foam also appeared at the plant’s dechlorination structure, where the excess flow facilities’ flow blended with the plant’s effluent flow. Here, the excess flow falls about 3 m
(10 ft) before being blended with plant effluent. 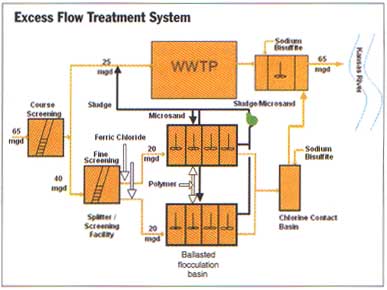 So, the project team checked the plant’s effluent discharge to the Kansas River, because it discharges through a 180-cm (72-in.) pipe and flows down over a rock structure, which provides turbulence, before discharging to the river. During low flows, the elevation from the pipe to the river is 6 m (20 ft).During testing, an expanse of white foam about 15 m wide x 3 km long (50 ft wide x 2 mi long) developed as a result of the turbulence and fall. Currently, the plant’s NPDES permit prevents effluent from being discharged to the Kansas River if more than a trace of foam is visible, so the test had to be stopped until no foam was present.

The project team determined that the polymer dose was not excessive (in fact, testing established that the optimum ferric chloride dosage for good solids removal was about 90 mg/L).

Instead, foaming was caused by ferric chloride reacting with biodegradable surfactants in the influent. Testing revealed that after wastewater solids had been removed in the ballasted flocculation basin, surfactants had nothing to attach to, and once flow discharged over any weir or rock structure that induced turbulence, the surfactants began to foam.

Results indicated that anionic surfactant levels at all locations were very low, under 3 mg/L (normal levels for wastewater are 1 to 20 mg/L; see Table 3, above). Unfortunately, the results did not provide any more infor- mation, for several reasons. First, the surfactants my not be anionic. Second, if several surfactants are present, anionic surf actant tests will be inaccurate because of interference from other surfactants. Third, city staff did not know any industry that could be discharging a high level of surfactants to the treatment plant, making it impossible to identify the surfactants’ source.

Testing with defoaming agents proved more successful. Initial jar tests used a defoamer (Drewplus A-8274) and common vegetable oil (soybean). Both the defoamer and the vegetable oil controlled foam immediately. Sodium hypochlorite was added to ensure that foaming would not occur after disinfection. Samples with and without the defoaming agent were tested for BOD to show the effect of the agent. Initial tests indicated that the agent did not affect BOD limits.

The defoamer was tested with ferric chloride and polymer doses of 55 mg/L and 1.5 mg/L, respectively. After ballasted flocculation, treated effluent samples were decanted into a sample bottle and shaken. Significant foam was observed on the sample surface.The project team then tested the vegetable oil by adding 5 pL of it to ballasted flocculation effluent. The sample was shaken and allowed to set. This process was repeated until the foam dissipated and did not return, which occurred when 20 pL of vegetable oil was added (this equates to approximately 20 mg/L). Sodium hypochlorite and sodium bisulfite were also added to the sample. Slight foaming was observed when the sample was shaken, but the foam dissipated almost immediately.

All jar testing was conducted using plastic equipment (jar testing vessels, sample containers, etc.) because plastics are most likely to support worst-case foaming conditions (surface tension, static charge, etc’ see Table 4, p. 34). The project team hoped that lower dosages of defoaming agent would be effective in the full-scale ballasted flocculation system, given its concrete chambers and stainless steel equipment, but full-scale testing at a flow rate of 7600 m3/d (2 mgd) showed that the higher doses were necessary.

So, the project team contacted other chemical companies to find several comparable defoamers that could control the foam at lower dosages and to determine the best place to add defoamer. Five locations were reviewed: before the ferric chloride dosage point, in the ballasted flocculation basin, at the ballasted flocculation effluent discharge point, after chlorination at the excess-flow chlorine contact basin, and after dechlorination but before blending with the plant’s effluent.

More than 10 defoaming agents were tested on ballasted flocculation effluent with doses of 75 mg/L and 1.5 mg/L of ferric chloride and polymer, respectively.

Sodium hypochlorite and sodium bisulfite were added to each jar test to ensure the disinfection and dechlorination process would not affect results. Testing showed that Tramfloc® 1110, Chemco DF-410, and Neo Solutions NS-8454 suppressed foam at doses of 1 to 5 mg/L, withTramfloc® 1110 yielding the best results.

In addition, it seems that the best application point is in the excess-flow chlorine contact basin, after either disinfection or dechlorination. Each defoamer is a silica emulsion, which may not affect the plant’s BOD, or fats, oil, and grease limits and, therefore, its NPDES permit. The project team then did full scale testing using primary basin effluent at a 19,000-m3/d
(5-mgd) flow rate to verify jar test results and determine the optimum dose (see Table 5, above). The jar test procedure was also modified to incorporate full-scale testing. During this testing, the project team noted that all three defoamers prevented foam from generating at points of impact and turbulence. The optimum dosage rates are:
• Tramfloc® 1110 at 1.25 mg/L,
• Chemco DF-410 at 3.0 mg/L, and
• Neo Solutions NS-8454 at 5.0 mg/L.

Thanks to the testing, the project team determined that the coagulant (ferric chloride) and polymer will be dosed at 75 to 100 mg/L and 0.75 to 1.0 mg/L, respectively. A microsand loss rate of 1 to 2 mg/L is expected to occur during operation. All peak flows will be screened with fine screens, treated in ballasted flocculation basins, chlorinated and dechlorinated in the chlorine contact basin, blended with the plant’s effluent, and discharged directly to the Kansas River. During operation of the ballasted flocculation basins, a defoamer will be dosed at a rate of 3 to 6 mg/L at the excess-flow chlorine contact basin.

John Keller is a project engineer and Matthew Schultze is a project manager at Black & Veatch Corp. (Kansas City, Mo.)